The year was 1987 and Waldo Dave and friend, John Roche, went to Calaveras County to see the Grateful Dead play with Santana and David Lindley & El Rayo - X at the 3 day Mountain Air Festival on Labor Day Weekend.

They saw the show on Friday and couldn’t find a place to stay that night so they parked in front of a library in Twain Harte and slept in their sleeping bags on a neatly trimmed lawn. When they woke up early the next morning Dave saw an old lady walking a poodle next to them who gave him a dirty look. Dave and John gave the lady big smiles and a hearty good morning! Mortified, the old lady scurried away with her poodle.

Saturday, Dave & John saw the show and were entertained by the musical acts and biplanes doing aerobatics above the concert. After the show, a local friend of Dave’s invited Dave & John to go to a party up at a place the friend partially owned with a group of other people called the Avery Ranch near Angels Camp. Avery Ranch is at the end of a very long bumpy dirt road that snakes its way up to the top of a mountain where the property is located.

When they arrived after their dusty ride they found the Avery Ranch which sits on many acres of a large flat meadow. They saw all kinds of small cabins scattered around the property and noticed the party going on near a large fire pit. Dave & John enjoyed some party favors with the crew when they saw a large banana type helicopter land in the middle of the meadow. They weren’t sure if it was the cops or the military there to bust everybody. The doors opened and the Grateful Dead all tromped out with their entourage. Bob Weir rode a mountain bike down the ramp. Dave & John were happily relieved and surprised to see this spectacle after witnessing the Dead in concert just a few hours earlier.

Later, Dave & John wandered around the meadow dotted with the small cabins. They walked by a small cabin with a porch in front and saw Jerry Garcia sitting alone on a rocking chair wearing a kind of psychedelic smock. They said hello to Jerry and asked if he’d like to smoke a joint. Jerry said sure come on up. Dave & John sat down on the porch with Jerry and sparked a fatty enjoying Jerry’s company. Dave told Jerry the Dead were really good as well as Santana’s band. Jerry jokingly told them he taught Carlos everything he knew about guitar playing from sneaking into Dead shows for several years at the Fillmore Auditorium. Jerry was very friendly and was interested in what Dave & John had to say. They smoked another joint and hung out with Jerry for over an hour talking music, weed, art, philosophy, etc. Dave & John realized that Jerry was treating them as equals with no airs of being a rock star. They said their goodbyes to Jerry and were in possession of a solid gold memory! 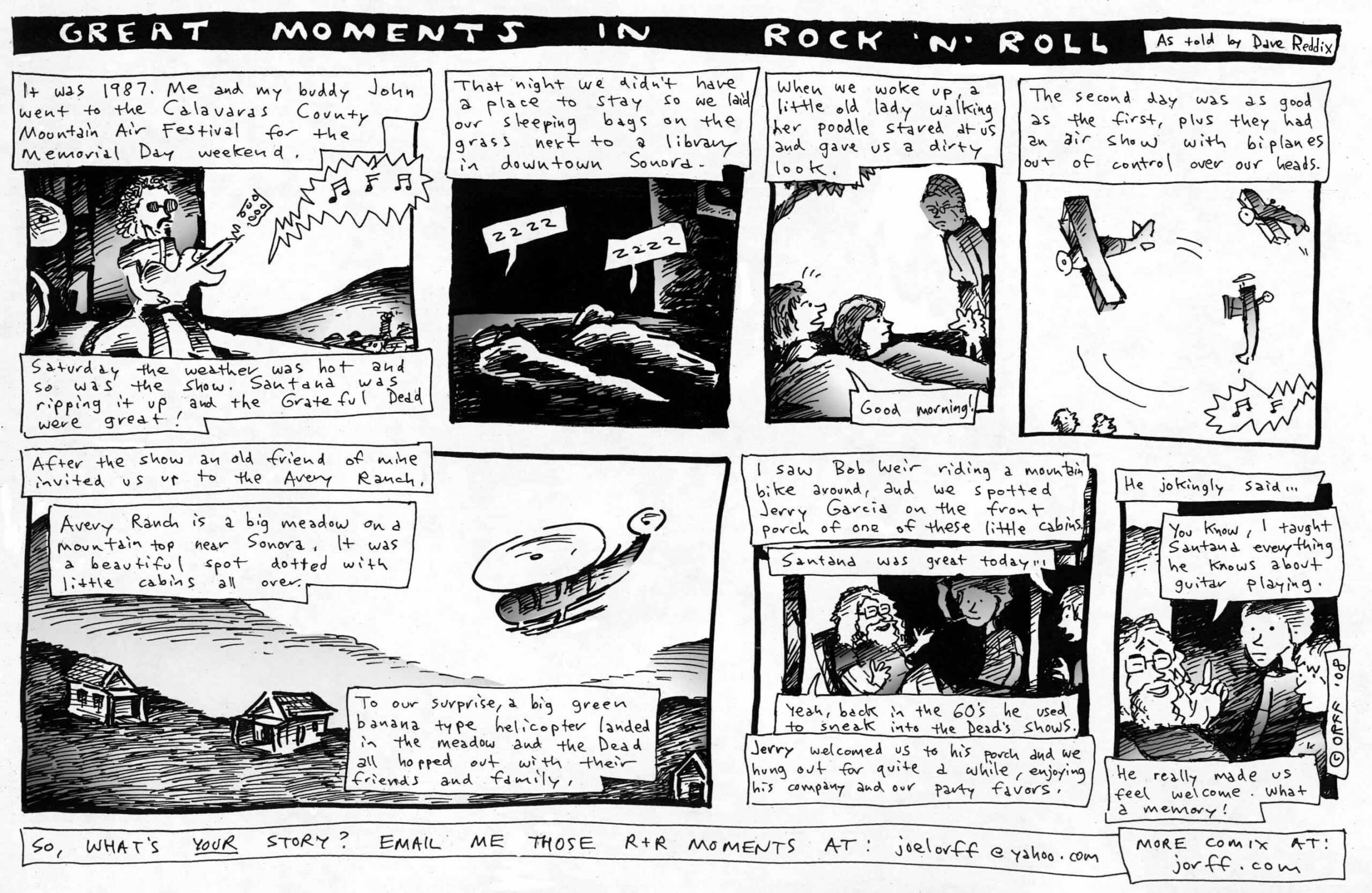