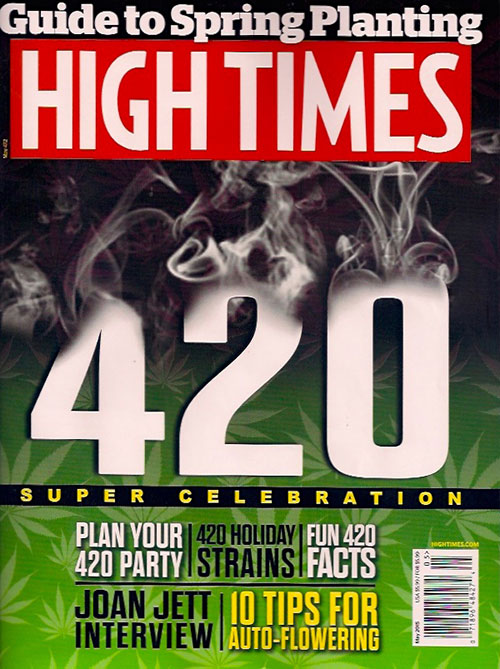 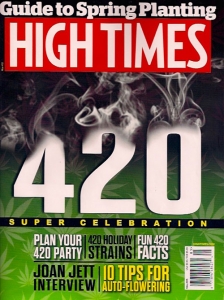 Wonderful to see the May 2015 issue of High Times Magazine on the shelves with absolutely gigantic smoking 420 numbers on the front cover. It says 420 Super Celebration. Also on the cover are titles of feature articles of ‘Plan your 420 Party’, ‘420 Holiday Strains’, and ‘Fun 420 Facts.’

Inside are many 420 related pages/articles and two pages of a sparkling 420-candled birthday cake and cupcakes all with green frosting sitting on piles of buds.

Everybody should have a copy. On page 66 are the Waldo’s origins of the phrase 420. It also mentions how the term 420 was helped spread by the Grateful Dead community. If somebody did not read the pages on The Waldos, 420Waldos.com website, then they may not understand the full story. Or somebody may get information wrong from other news organizations that are less credible than High Times.

Grateful Dead music followers and fans inadvertently picked up the 420 phrase from the Waldos. Dead followers just happened to smoke a lot of cannabis. The Dead band members themselves had nothing to do with the origination of the term.

The Waldos did associate with the Dead. Most reports in media, including the newest HT 420 issue, have called attention to the friendship (and past working association) between Dead bassist Phil Lesh and Waldo Dave’s older brother Pat…which led to Waldos interaction with the Dead. Other associations have not been covered so well, but are a part of the history:
Waldo Mark was also responsible for 70’s Waldo/Grateful Dead associations. Waldo Mark’s father, Herman, aka Hy, was a cool and mellow pipe-smoking Marin County real estate broker who worked with the Grateful Dead/New Riders of the Purple Sage. As the Dead/New Riders organization grew in size they needed rehearsal space, space to store equipment, etc. And as band members and other members of their organization made money, he found many of them their homes in the Marin County hills. Then, when band members went out on tour, Waldos would take care of their homes and pets. When Hy located rehearsal/storage space, friendly Waldos went down to hang out and 420. When the Dead/New Riders played the Winterland Arena every Monday night in San Francisco, Hy would often take the Waldos—always backstage guest list.
Waldo Steve