The Waldo’s story is about marijuana prohibition and drug suppression in America. And it is the historical story of their unintentional part in the beginnings of the end of Cannabis prohibition. The Waldo’s were never cannabis activists or political. The cannabis freedoms they fostered were inadvertent, and yet significant

The Waldos, prolific comedic catchphrase originators, went to search for a personal treasure and resultingly created a secret phrase … ‘420’. The actual treasure was never found but the treasure search and phrase turned into a treasure for all-- a powerful catalyst for the end of prohibition.

The details of the sociological/historical/ cultural influence of the phrase ‘420’ has been examined in an academic white paper written by Professor of Sociology at Pennsylvania State University, Karen Duncan.

To this day the term ‘420’ (and April 20th, 4/20 day) continues around the world as a force for freedom and liberation from drug suppression, while retaining its original character of fun and humor… the original true spirit of the Waldos. How was it that the Waldos doing their own thing creatively and innocently, ended up affecting millions of people?

The catchphrase term 420 was ‘borne’ out of drug suppression. U.S. Coast Guard member Gary Newman was growing cannabis, and he was afraid that his commanding officers were going to bust him. For that reason, he decided to abandon the crop and let his brother in law and the Waldos harvest it. And so, the Waldos met after school at 4:20 to attempt to do so.

It was only a matter of weeks before the Waldo’s adopted 420 as a secret way to communicate about cannabis, so that parents, school administrators, coaches, law-enforcement, etc., ... the entire world of ‘drug suppression’ at the time, would not know what they were talking about. 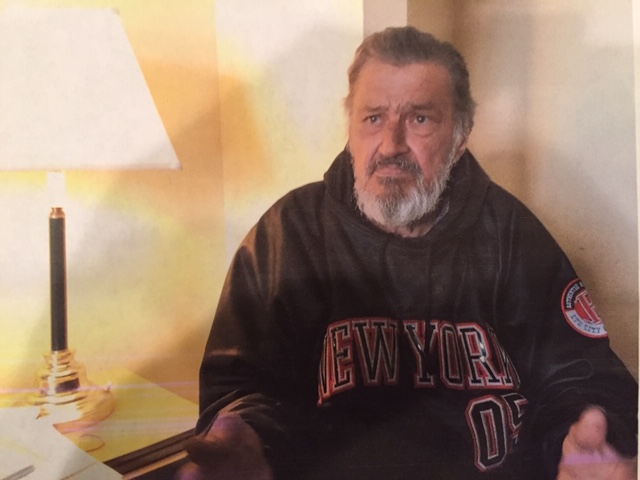 It must also be considered that Waldo Jeff’s father was in law enforcement… specifically a high-level narcotics officer. A secret code to communicate about cannabis was certainly useful for son Jeff and his buddies. 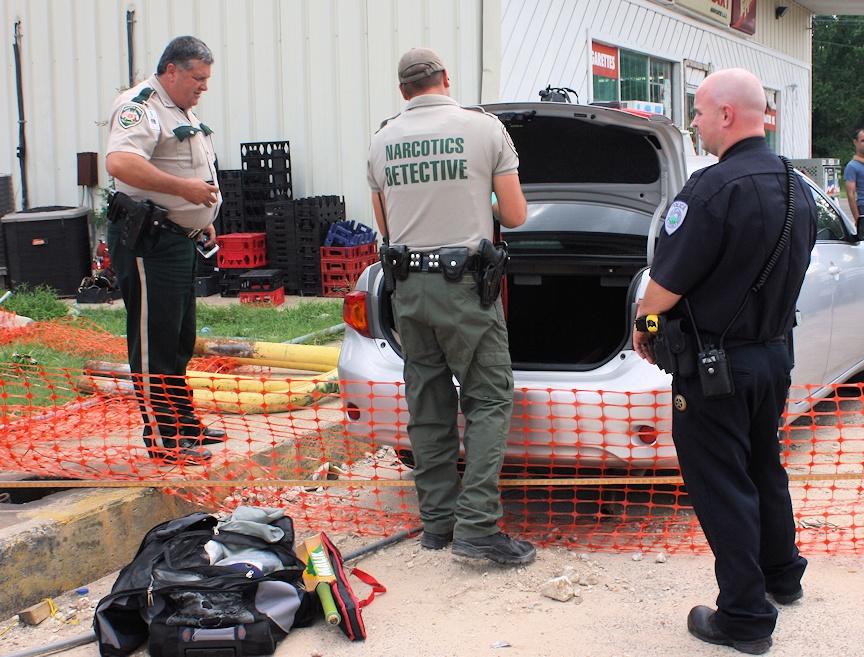 The first public gatherings to celebrate marijuana, were always on April 20th, 4/20 or 420 day. Earliest gatherings were on Mt. Tamalpais in Marin County, home turf of the Waldos. Then years later, while still highly illegal, tens of thousands of people gathered at the University of Colorado in Boulder, in San Francisco’s Golden Gate Park, and at the University of Santa Cruz. These gatherings were not only to celebrate cannabis, but they were also ‘in defiance of drug suppression’ and/or to ‘protest drug suppression.’ And it worked. There were so many participants, the police were overwhelmed and could do nothing but accept it and let it happen.

These April 20th 420 events became annual events… a focal point for celebration, defiance, and a strong show of support for cannabis, and solidarity for change in marijuana drug laws. Nobody would get together on any other random day of the calendar. Everybody understood that THE day for this was 420 day… April 20th. 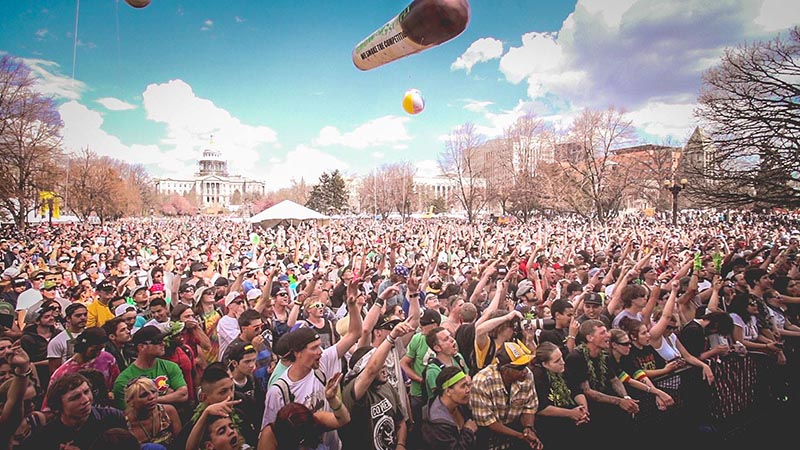 For years, NORML The National Organization for the Reform of Marijuana Laws and other groups and individuals with the same sentiments/goals were able to get Congress and certain State legislatures to discuss reform of marijuana laws on April 20, 4/20 day each year. It was THE day of the year that the governmental bodies were most willing to listen…the days they would calendar their ears for it. A scheduled calendar date 4/20 to the charge brought together a goal, a focus, a solidarity, and an acceptance of the fight; in addition to the public gatherings, these also were the beginnings of and efforts for the end of marijuana prohibition.

California Senate Bill 420, colloquially known as the Medial Marijuana Program Act (see Wikipeida) was a bill passed by the California State Legislature and signed by Governor Gray Davis way back in 2003. It helped to create and clarify medical marijuana programs. It is not by total accident that the Bill number is “420’. 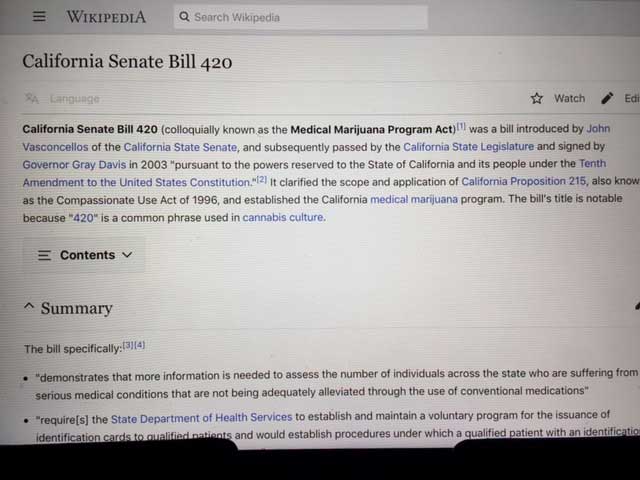 For years, major media including newspapers, magazines, radio and television were somewhat in the closet with marijuana. April 20th totally shattered those limitations. Now, media could not ignore the 420 gatherings and defiance, the spread of and continuing forces for medical marijuana, and all the opinions/editorials about marijuana. On April 20th every year, like no other day ever, the world of media gave marijuana ‘A FORUM’. Even mainstream conservative media could not ignore the forces and soon came to accept it all… or be left out. Consider shown here the gigantic advertisement in USA Today right next to the U.S. Stock Market. Look closer and you will notice the only day they would ever do such a print, April 20th--420 Day. 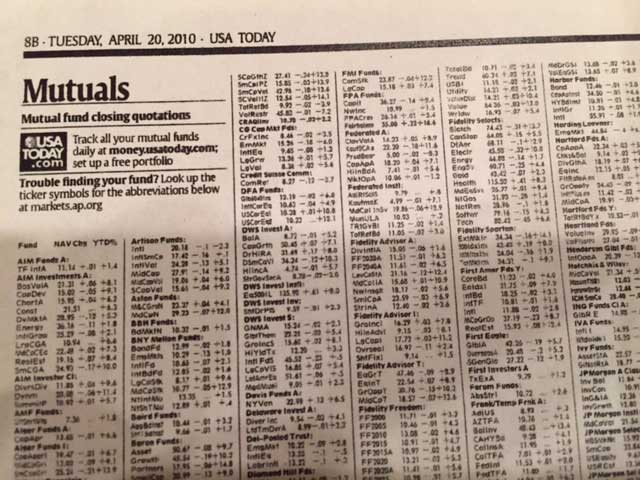 The fifth leg of 420’s role in the arena drug suppression, prohibition, and the end of prohibition is about how the world feels about it and reacts to it all-- as examined in the academic paper by Penn State Sociology Professor Duncan.

420 is a source of unity or oneness in the pot smoker community, a time to unite with all smokers, and a way that brings users together for smoking, community and solidarity. They know that when they light up at 4:20 or on 4/20, thousands if not millions of others are doing the same thing for the same reason. 4/20 is a day of events when people who might be strangers in other settings are bonded through their common allegiance to marijuana.

The sense of worldwide “we-ness” and the friendships established and renewed at 420 celebrations are due to the fact April 20 is a public forum for the fight for legalization. It has been described as an exercise in solidarity--all of the smokers coming together to smoke and the police being utterly powerless to do anything about it. It has also been described as a day of “tolerance” and ‘non-enforcement’ when the “authorities let us have our fun and smoke pot.” People find it to be one of the most liberating feelings to smoke pot in public and not be afraid of getting caught. The experience of such a holiday provides pot smokers with hope and inspiration with a vision of a future when they will be liberated from repressive antimarijuana laws.

It puts the recreational use of marijuana in full view of the public, which is perhaps the first step towards gaining legitimacy. People feel it is a time to come together and stand strong and proud for marijuana; they feel it to be a ‘political statement’—a good time to gather to show one’s support for legalization of marijuana.

‘420’ like no other cannabis vernacular or communications slipped into the mainstream and became effective as a force to end prohibition because of a magical quality; people find it funny, along with the quality of an inside secret joke.

Decriminalization/legalization activists have used ‘420’ successfully as a focal point, a focus to get issues heard and goals accomplished. Yet it carries a counterbalance of ‘lets have fun with it and let’s not take it all too seriously.’ To the Waldos who created it, 420 was originally a secret joke, carrying a spirit of fun and humor—(humor, the primary bond of the friendship of the Waldos.) And today decades later it continues to exude that vibe.

The Waldos were unwittingly a factor in the end of prohibition without the knowledge or foresight that 420 would develop as it did. And after years in retrospect ‘420’ could be considered a catalyst in part.