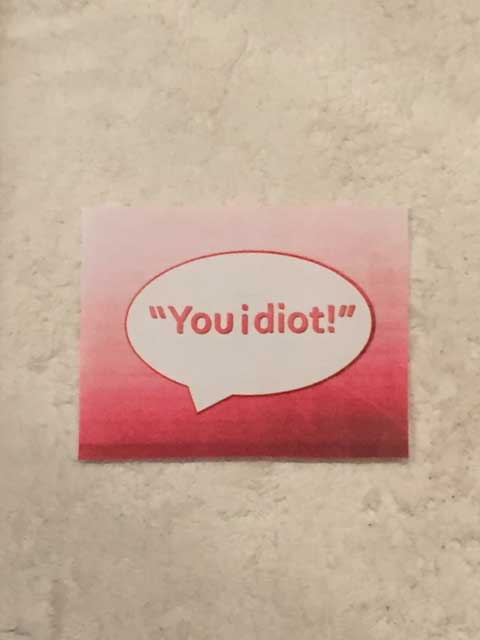 The phrase is used to joke about (not opinion on, or shame) anybody’s bonehead mistakes, statements or actions.  It is NOT “You Idiot”— there is NO space or pause between two words.   It is not said directly to anybody, but only about somebody.   Any reader here may think, ‘that’s not a very original phrase because any civilian, shmo, or unintelligent person can say or think, You Idiot‘.  On the contrary; what makes this distinctly a Waldo phrase is the way it is said.  It’s “Youidiot”, one word.  There is no strong emphasis or tone at all.  The primary distinct characteristic is that it is said extremely fast.  No other way is acceptable.   Saying it super speedy renders it Waldo comedic, a joke, rather than just the expression of an opinion.

A Waldo received a birthday present from his mother—a novelty plastic paddle.  Like a little tennis racquet about ten inches high, on the face of it where racquet strings would normally be there was a series of oval-shaped interchangeable signs that you could flip over.  These signs would specifically be used to communicate with another auto or vehicle as you passed by them.  One sign said, ‘Pull Over’.  Another sign said, ‘Your Blinker is On’.  Another said, ‘You’re Cute’.   And our favorite one said, ‘You Idiot!’  (This was long before any incidents of road rage.)
We never used the ‘You Idiot!’ sign, however, that someone even manufactured such a sign was humorous to us.   The phrase by itself became a useful lightening quick joke conclusion in a world of chaos.
These days you can pick up a newspaper, hear the radio or watch the news, and every third story find that there’s no need to form a lengthy useless opinion …. but rather you can expeditiously conclude and utter a speedy fast and satisfying (laugh), “Youidiot”.