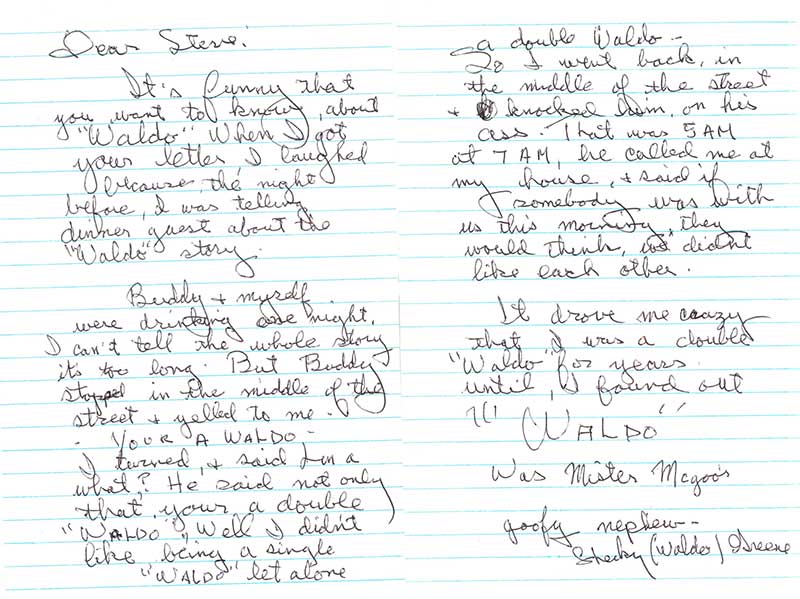 A phrase the Waldos would say to each other anytime,… and at our choice we would reverse the two names Waldo and Shecky,

Each one of those two names by themselves alone had a comedic ring to it but the two names Waldo and Shecky combined together into one phrase had an even greater corny-comedic sound.  It sounded so quintessentially like something a Catskill Mountain Era Borscht Belt comic might say.    And of course, we had a special connection to the name Waldo.

The Waldos were so named— and self named— because they always perched on a ‘wall’ at their high school campus, thus Wall-dos…or Waldos.    We had already been calling ourselves The Waldo’s for a quite a time when one night something miraculous happened;

The Waldos were watching the Tonight Show with Johnny Carson.  Famous Las Vegas/Catskill and television comedian Buddy Hackett was telling Johnny a story about an incident with him and another famous Las Vegas comedian, Shecky Greene.  At one point in the middle of his story Buddy says, “so I said to him…You’re a Waldo Shecky”,

The Waldos had never heard anybody outside of our group use the term Waldo before, and we were astonished.  The Waldo’s were young funny guys, and now out of the blue and unconnected to us, these much older funny guys were privately referring to each other as Waldo (but for a different reason.)  We found it hilarious.

In Buddy Hackett’s usage, it was not used as a stand alone phrase or catchphrase, but rather just as part of a larger story.  The Waldos liked the comedic ring of the phrase so much we used it by itself and would interchangeably reverse the names.

In 2005 the Waldos wrote to comedian Shecky Greene asking about the background of Buddy Hackett’s story and usage of Waldo.  We were then so very surprised and thrilled to get a personally hand-written two-page letter from Shecky explaining the origins of their usage.  In the letter he explained that their own ‘Waldo’ referred to or meant ‘an odd and awkward person’.  And it came from a minor character ‘Waldo’ in the old cartoon Mr. Magoo.

Later in 2019 we received permission from Shecky to post his private letter to us.  Available above.