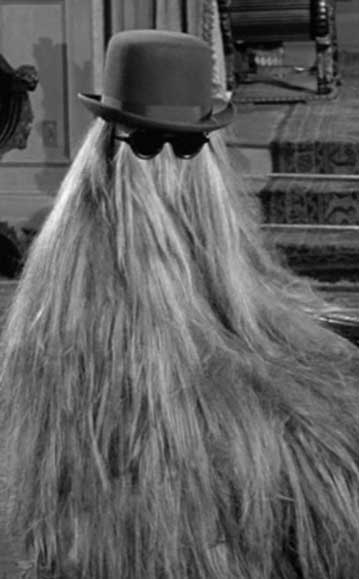 Cousin Itt was a character from the television show The Addams Family.    Just a few feet tall and 100% hair from head to toe, you could never see his face although he wore sunglasses, and often a brown derby.  A minor character on the television show and not in every episode, to the Waldos he was a star.  His home was in the chimney.

It’s too difficult to spell out in letters-words what Cousin Itt’s high-pitched vernacular gibberish sounds like, but his vocalizations fit the Waldo world superbly.  (This was the sound of Cousin Itt from the ORIGINAL television show only, NOT in any subsequent cartoons or movies.)  Itt’s interaction with any of the other characters on the show was a second-by-second delight, especially if you happened to be watching it while high.  Some of those original-television show scenes are on YouTube

Somehow, Waldo Steve was able to do an impersonation of Itt… a Waldo favorite.